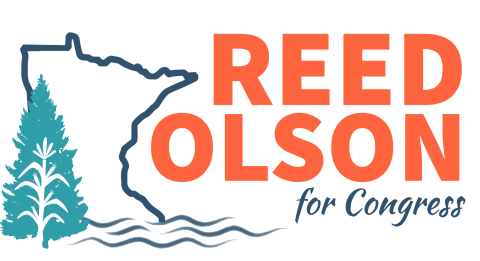 Reed Olson grew up spending time on his family’s farm in Litchfield, MN, where his earliest jobs included corn detasseling, rock picking and cleaning pig stalls. While he came of age during the 1980s, he watched the government turn its back on small farmers. Those early experiences both inform and bolster his commitment to continue to support small farms and the descendants of former family farms.

An Advocate for Affordable Housing for All

As a founding board member and current executive director of a non-profit which operates a homeless shelter, Reed has intimate knowledge of the policies and issues related to homelessness and housing. He has witnessed the struggles that unhoused people face, and he is dedicated to securing affordable housing for all Minnesotans.

Reed entered local politics in 2013 as a Bemidji City Councilmember and is currently serving his second term as a Beltrami County Commissioner. As an elected official, he has fought tirelessly to improve the lives of his neighbors, a fight he looks forward to bringing to Washington in 2022.

How Can I Support Reed?